Free Tickets are the Best Tickets 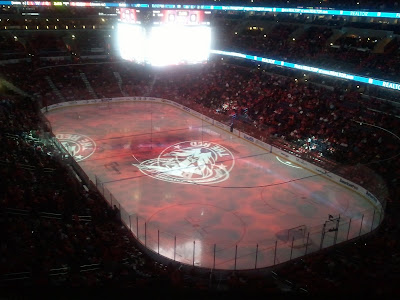 When I got up Tuesday morning, I didn't have much in the way of plans for the day. Some groceries to buy, a few things around town I had to hit up for various products, and a what promised to be an uneventful night that would be thankfully filled watching the boys in Red on the television. The days events went off without much surprise. The night, however, was an entirely different affair.

An hour or so after the groceries we put up and a cheap lunch of Safeway Chinese food ingested I sat down to pour through the days events on various forums, social networking sites, and blogs. My usual haunts offered little in the way of interesting content on the day. Twitter on the other hand was, as usual, abuzz with hockey tidbits. New tweets came up as I read and upon clicking to read them I came to find Nate Ewell was giving up two tickets to the nights game against Tampa Bay in an impromptu contest.

I went mostly with instinct on the choices. I knew Ovi was mic'ed from watching the game. The others I took educated guesses on. Knowing that Hendy was featured rather prominently though the show so far, and they would likely go with two other big names. Green and Knuble stood out as solid choices. A few refreshes later and I saw this:

My first reaction was disbelief. A friend I had been chatting with had a more vulgar reaction as he learned of my luck. When the excitement had worn I was struck by the disturbing realization that my wife might not actually be able to make the game, and thus I'd be forced to forfeit the tickets so someone could fill those seats. I immediately set to text messaging her at work and uneasily waited for her response. When she was finally able to get back she couldn't have been more excited by the idea of going directly from work to the game!

I sorted a few things around the house and headed to the metro to meet up with her. Things were slow there. But as has happened many times before, when I show up things get busy. The early optimism waned and the chance of missing puck drop was becoming the reality. We rushed out as soon as she was able and hit the metro once again on our way to Chinatown. I love the convenience of the train, but it couldn't have felt slower that night. Every late passenger that threw a hand out to stop the doors from closing became my newest enemy. The choppy break job by the driver made for slow stops which ticked more time off the clock. We were going to miss puck drop.

The Chinatown stop finally came and we rushed out metro-cards in hand to expedite our exit. Up the escalator at a jog and through the gantlet of scalpers we rushed into Verizon Center and to the Will Call windows. Through the ticket check, up a bunch of flights of escalators, the game was in progress but the scoreboard still showing double zero. Taking the chance at fast vendors, we grabbed some food and beer before heading to our section. 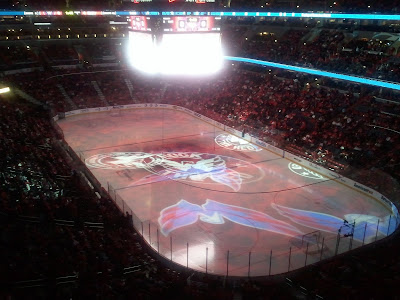 Most games we tend to sit in the lower bowl in what are rather expensive seats. The last game we attended found us in club level seating. These seats were our first chance to watch from what we've always deemed 'the nosebleeds'. I've always wondered just how much you could truly see from so far up. I couldn't have been happier with the view of the rink we were afforded from our vantage point. 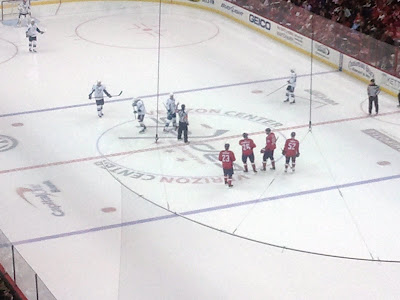 The game was a defensive back and forth with some really great chances but unfortunately it didn't quite go our way in OT. I turned to my wife and shrugged after the Lightning's winning goal. "At least we got a point." I lamented. "Hey, it was free!" she replied with a smile. 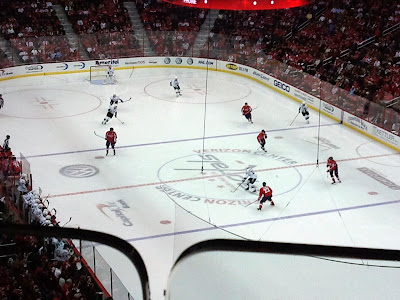 Making our way back to the Metro in a sea of red, I couldn't help but think about how different the night ended up from what I was expecting. We missed the first train, but a thankfully empty second led to a comfortable ride home. This last bit of luck a good send off to a great night.

Thanks to Nate for the tickets and to my lovely wife for being the perfect company. This is something I'll remember for some time to come.
Posted by Aaron at 9:18 PM